Rob Hiller of Rochester is Home 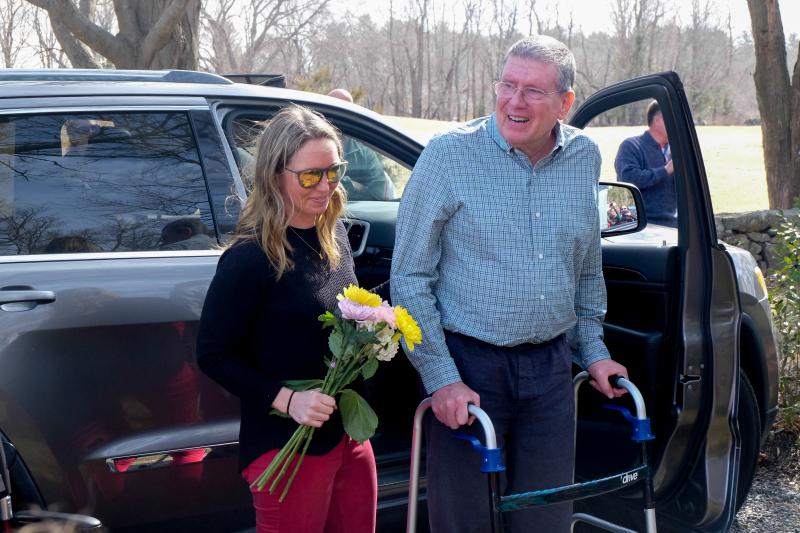 Rob Hiller, 65, arrives home to a large crowd of supporters, including his daughter, Tess Hiller Hedblom, 34. Photo by: Tim Seeberger 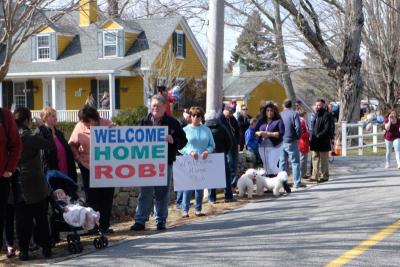 Supporters line the street in front East Over Farms where Hiller lives. Photo by: Tim Seeberger 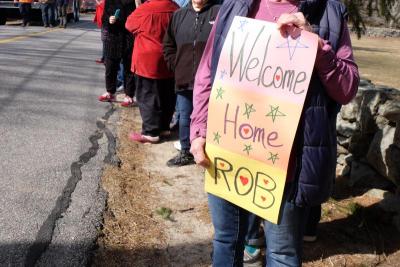 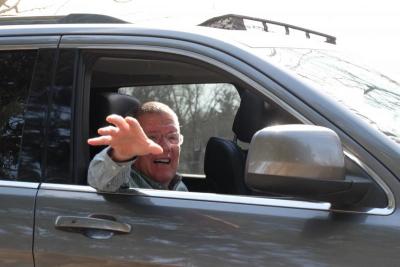 Hiller waves to friends and family as he arrives to his Hiller rd residence. Photo by: Tim Seeberger 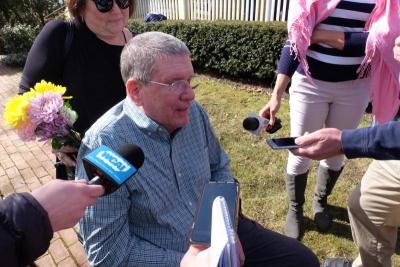 Hiller sits in a crowd of reporters who ask him questions. Photo by: Tim Seeberger 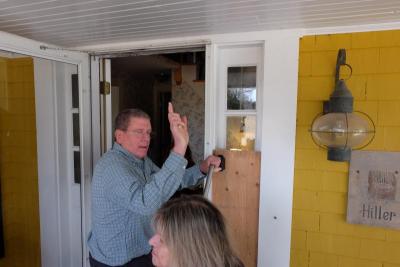 Rob Hiller waves goodbye as he enters his home for the first time in seven months. Photo by: Tim Seeberger

ROCHESTER – A large crowd gathered outside of East Over Farms in Rochester to celebrate the homecoming of Rob Hiller, 65, on the afternoon of March 3 after he finished a seven-month battle with Eastern equine encephalitis.

The viral disease has outbreaks every few years and is carried by mosquitoes. It is relatively rare, but has a high fatality rate. Hiller was the first person in the state to get the disease since 2013.

Friends and family gathered around the jeep driven by his wife, Sandi Hiller, 60, as the two pulled into their driveway for the first time since Rob was admitted to Tobey Hospital on Aug. 4.

“I’m happy to be home, happy to see my family, my house and all my friends,” said Rob.

After getting out of his car and into a wheelchair with the help of his daughter, Tess Hiller Hedblom, 34, he was surrounded not only by those who came to see his return but also by a flurry of reporters who were there to ask about how this homecoming felt.

Rob could only express gratitude at the overwhelming support.

“I’m highly grateful for being alive and having so many friends and family,” said Rob.

Sandi believes he was bitten on his arm somewhere in Rochester between Aug. 4 and Aug. 5, when Rob noticed a mosquito bite on his arm.

After being admitted to Tobey Hospital on Aug. 5, his diagnosis was confirmed on Aug. 10.

On Aug. 7, the Hiller’s family was called to the Neuroscience ICU at Brigham and Women’s Hospital in Boston for what they thought was going to be the last time they saw him.

Turned out it wasn’t, but the road to recovery was a long process.

2019 saw one of the worst outbreaks of EEE in recent memory. The Tri-Town adapted by closing parks and beaches at dusk from August to November and conducted aerial sprays to curb the mosquito population.

After Rob’s case was confirmed, Rochester began to spray the next day.

Marsha Hartley, a close friend of Rob, called his situation absolutely gut-wrenching and said  to see him home once again is “phenomenal.”

She expected some to show up, but she didn’t so many people and two fire trucks from the Rochester Fire Department to be there for his arrival.

While initially shocked that so many people showed up, Sandi was not surprised at the turnout because her husband is loved by so many.

Now that he’s home, Rob looks to get back to his normal life.

“I’m just gonna go in and sit with my dogs and my family,” said Hiller.

Visit www.sippican.theweektoday.com for all your local, heartwarming stories in the tri-town.

BOLD Real Estate is your local hometown real estate agency.  Our agents live and work in the communities they serve.  They are your local experts.  Let them help take the anxiety out of you r real estate move. Call 508-999-9800 or visit www.boldrealestate.com