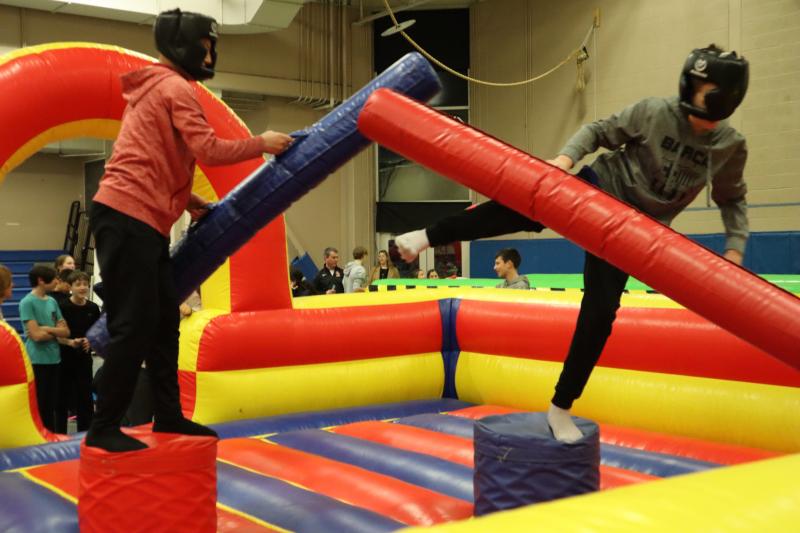 MATTAPOISETT — Playing video games, singing karaoke, and sumo wrestling aren’t normally allowed in school, but once a year, the Old Rochester Regional Junior High School makes an exception for “WinterFest,” an event that provides students in grades six through eight with a night of fun and camaraderie.

WinterFest not only gives junior high schoolers a chance to have fun, but also welcomes sixth graders from all of the Tri-Town’s elementary schools to check out the school building, and make new friends.

Guidance Counselor Sheri DeChellis organized this year’s event with help from students in the AmbassadOR program, who collect input from the student body to make WinterFest as appealing as possible.

Aaliyah Ingham took to the stage to sing Miley Cyrus’ hit “It’s the Climb,” alongside her friend Connie Friedman. She then wowed a crowd of her peers with a solo rendition of “Hallelujah.”

After her performance, she said she “just wanted to have fun, and show the audience music.”

Elsewhere in the auditorium, kids were treated to concessions of popcorn, cotton candy, and hot cocoa.

In the gym, a series of inflatable games and activities like sumo wrestling, jousting, and obstacle courses had students lining up in anticipation for their turn.

Just outside of the gym, the “Amazin’ Gamin’” video game bus offered kids with a chance to play all types of gaming consoles, as lights flashed and music blared throughout the vehicle.

If that wasn’t enough, party and carnival-style games lined the hallways in between the gym and auditorium.

Seventh graders Zoe Plante and Zachary Steed faced off in a game of “Snow Day.”

The game challenges participants to pick up as many mini-marshmallows as possible with chopsticks, and then place them in a container before running out of time.

Assistant Principal Kelly Chouinard refereed the game, and said that WinterFest is a benefit to students because it is a  “great opportunity for our junior high students to come and really enjoy each other’s company outside of the academic day.”

Visiting Rochester Memorial School sixth graders Quinn Chisholm and Madison Detrani competed against each other in a game of “Speedball,” which is similar to skee ball, except on a smaller scale.

“I like it here, it’s fun,” Chisholm said of the junior high school.

Both students commented that the school is much bigger than Rochester Memorial.

According to DeChellis, all proceeds from this year’s WinterFest will go towards next year’s celebration.

Visit www.sippican.theweektoday.com for more tri-town stories.  BOLD Real Estate is your BOLDTown real estate company.  We live and work in the towns we serve. Visit www.boldrealestate.com or call 508-999-9800  Let us take the worry out of your real estate move.